Home » YET THEY MOVE 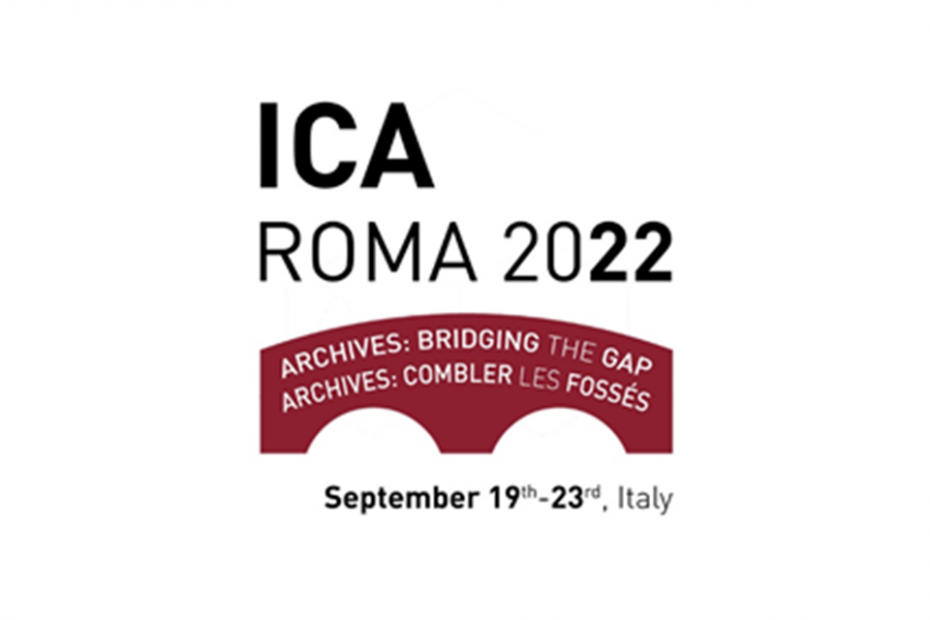 Wainting for ICA Congress: follow us! The poster will be available from 22 September. See you soon!

Annalisa Rossi – PhD, Working at the Ministry of Culture, since 2018 manages the Soprintendenza Archivistica e Bibliografica (SAB) della Lombardia (regional office for the protection of the Archives and Libraries), after managing the SAB of Piemonte, Valle d’Aosta, Puglia, Basilicata and the State Archive of Torino and Milano. Has a wide experience in research in the field of written records and a long history in the field of the Education and Training, in the italian and in the EU area. She’s engaged in spreading the awareness of the Cultural Heritage protection as a driver of developement of communities.

The title recalls the famous saying attributed to Galileo Galilei (1564–1642), “And Yet It Moves,” even though not authored by him: it is exemplary of a story, as well as a cultural and revolutionary cosmological mindset The main graphic idea of this poster is the same Galileo’s universe, as drawn and copied in known manuscripts, viewed as a system within which each part depends on the other ones and takes its own life and movement from the other’s[1].

In the context of the present special issue, it hints at the idea that archival materials are both sited and mobile. This dynamic condition is amplified in a global digital age, and yet archives remain impacted by their local cultural, political, and geographically sited conditions and their policies and politics of access, inclusion and promotion. The possibility to mobilize knowledge through digital archival methods, allowing researchers, architects, connoisseurs and the broader public to come into contact with these realities, has the potential to narrow the dark corners of archives, opening the doors to multi-culturally-sited and temporal interpretations.

The paper explores the relationship between archives and landscape (as defined in the European Landscape Convention)[2] within a new perspective due to the idea of archives themselves as a place or as a  ‘relationship’ among people and the objects they produce and they live in and look at and understand and define. The implications of this assumption make it necessary to reconsider the management of protection and preservation of the archives, designing a new roadmap and model for an innovative governance of the preservation and enhancing policies, aimed to save the relationship itself as a value asset.

They [archival documents] inhabit this uncommon place, this place of election where law and singularity intersect in privilege. At the intersection of the topological and the nomological, of the place and the law, of the substrate and the authority, a scene of domiciliation becomes at once visible and invisible”[3]

The paper explores the relationship between archives and landscape within a new perspective due to the idea of archives themselves as a ‘relationship’. That archives can be an asset, evaluable and useful to a wide range of goals, is an issue. Moving to the awareness of the archive as a ‘relationship’ (so as a bridge itself) means to leave from the ‘asset’ idea to the ‘heritage’ idea, where heritage is the asset gathered with the whole crop of knowledge produced about it by itself or by the communities. The European Landscape Convention, both with the Faro Convention[4], describes landscape as a product of the individual and public perception of the system of environment, human products and the multilayer knowledge and meanings produced in the time about it. Otherwise landscape is a record of nature and people passed through it.

Since an archive is the life sediment of its creator, it comes to become a significant part of that landscape.

Exploring the implications of this assumption involves the necessity to reconsider entirely the management of protection, preservation, enhancement of the archives, especially when the massive digitization of them seems to indicate a different direction, rather dealing with the idea to build a sort of ‘universal digital library’ (or ‘world archive’)[5], able to contain and to connect all of the existing archives[6], despite their time or place. Aware of this global dream, generated from the application of ICT, it must be more and more important to reach a new vision about the development of the protection and preservation policies (and related politics) of the analogue archives.

In order to explain why to look at an archive as a place and so as the relationship between a subject and an object that produce a context[7], it’s meaningful the example of such a typology of archive, the architectural one.

It naturally deals with the place it has been produced in, with what its creator saw and touched when produced it, with the nature and the future idea of place its creator had while producing it.  About this suggestion, I think it is useful reminding the medieval practices of tracing drawings and profiles of full scale architectural elements on the site itself. This practice documents the immobility of the drawings, which were an integral part of the construction site and the building. Some of the well documented medieval examples include the “tracing houses” of Wells and York Minster Cathedral[8] but also  referring to various Michelangelo’s works.

The urgency becomes apparent when considering that actual age of digital production, overproduction and reproduction is reconceiving not just architecture archives but also the modes of archival access on a local and global scale. Our digital age is characterized by ubiquitous sites of drawing production and archival. Private and public architecture archives are hybrid digital/physical constructs faced with the challenge of what and how much to preserve and how to regulate privilege and access. The significance of the history of continuity and contiguity of drawings, models, and buildings establishing meaningful on-site relations (in situ) versus off-site archival (ex-situ), has yet to be fully acknowledged[9].  When kept in-situ, the spatial contiguity and temporal continuity of drawings-models-and-building may define an extended site of knowledge construction[10]: a new possibility to produce knowledge as public value for all.

Along this idea, it is interesting to explore the hypothesis of the archive itself as a “memory theater”, enacted in drawings that are witnesses to buildings and sites under transformation where cultural and historical events are grounded. A whole city, in this reading, can become the witness of a sited-history where built artifacts of architecture become memory theaters embodying and displaying the ‘facticity’ of history[11].

Every new act of engagement with archival objects extends an original dialogue with the monument and the storytellers, who participate in the continuous reinterpretation of a site that is always in-the-making. One could say that the relationship between the archivist and the archive shapes and is shaped by memories revealed and concealed in-situ, establishing the order itself of the archive[12]. Where broken, this link switch off the possibility to know the deep sense of the place together with the order of the archive and with the creation process that generated it.

As a matter of fact, first of all it becomes necessary to review the common practice to storage architectural archives, or part of archives in museums: it is nowadays still spreading all over Italy, although the activity of some protection offices tries to not encourage it. About the issue, for example, Marco Frascari noticed that “Architecturecannot be shown in museums.[ … ] In museums drawings, models or photos of architecture can be shown and appreciated for their own intrinsic qualities as agents and vehicles for architecture [ … ] these visual means connote architecture, but the architectural qualities and properties cannot be directly denoted.” Drawing on this distinction between connoting and denoting architecture, the on-site presence of elected representations becomes emblematic of the process of on-site inventory in its dual nature of cultural recollection and fostering of future imaginings. There are numerous examples of in situ archives, both historically and in recent times, from the architects to the enterprises and industrial ones[13].

Since an archive provides a continuous record of the achievements of society over time[14], if “the concept of the architectural museum (…) must be almost as old as the profession itself”, then we  all are asked to be aware that moving archives from their original places means to damage the landscape, exactly as moving a building or a site. It becomes therefore necessary to design an executive roadmap and model for an innovative governance of the archives protection, preservation and enhancing policies.

Basing on the public nature of the archives’ value, the responsibility about this has to be entirely public, yet referring to the State- and public bodies, yet to the private bodies engaged in collecting, protecting and preserving archives.

This means that, for example, in Italy the role of the specific protection offices of the Ministry of Culture (the Soprintendenze archivistiche e bibliografiche) rises up to a new awareness of proactivity and social responsibility. They have to assume the tools and the actions to govern the multilayer networks of public and private bodies involved in the issue.

Archives (not only architectural) move and those movements often break the relationship with their contexts, loosing meaning and (public) value and knowledge.

Buildings do not move as well as archives: they both are a significant part of the landscape.

This assumption has a lot of consequences within the same application of the Italian rules about the cultural heritage and landscape: I think it could be a very precious public exercise to change the vision (and the rules too) about it, in order to preserve not only the archives- objects but their sense and value for the communities and their development.

Within this perspective arise a lot of further issues: the availability of places and specific public and professional skills as well of funds necessary to guarantee the effectiveness of such an ambitious aim. It is true, but it is both true that only maintaining the link between archives and their context become possible those capability processes which found the key competences of citizenship.

[1] The suggestion comes from Federica Goffi And Yet It Moves: Ethics, Power and Politics in the Stories of Collecting, Archiving and Displaying of Drawings and Models, «Architecture and Culture» vol. 9, n. 3 (2021), 365-384

[6] Especially when considered as vox media, despite of their own nature of records of the activity and life of creator, but as a collection of objects, records, books etc. translated in such a virtual form

[7] About the archive as a subject, see Derrida cit.

[8] Robin Evans, Translations from Drawing to Building, 160; Mario Carpo, Building with Geometry, Drawing with Numbers, in When is the Digital in Architecture?, ed. Andrew Goodhouse (Berlin: Sternberg Press, 2017), 43;  Alexander Holton, The Working Space of the Medieval Master Mason: The Tracing Houses of York Minster and Wells Cathedral in Proceedings of the Second International Congress on Construction History (Volume II, 2006), 1579–1597

[9] The authors contributing to And Yet It Moves and the Routledge Companion to Architectural Drawings and Models tackle questions informing the future planning of archival sites-in-becoming – considering how past and future are to engage in meaningful, inclusive and multicultural relations

[14] Paul Kotze, In memory of Sophia Gray: Store houses of knowledge, «Journal of the South African Institute of Architects» (1998) Sept/Oct, 43-47

This website uses cookies to improve your experience while you navigate through the website. Out of these, the cookies that are categorized as necessary are stored on your browser as they are essential for the working of basic functionalities of the website. We also use third-party cookies that help us analyze and understand how you use this website. These cookies will be stored in your browser only with your consent. You also have the option to opt-out of these cookies. But opting out of some of these cookies may affect your browsing experience.
SAVE & ACCEPT